With more than 22.4 million funded accounts, Robinhood Markets‘ stock trading platform has helped introduce millions of people to the world of investing. The platform’s users have been associated with explosive meme stocks like GameStop and AMC Entertainment and risky options plays, but they also own a wide variety of stocks. Some analysts think it’s worth keeping an eye on the platform’s list of most widely held stocks to see what’s popular with the increasingly influential retail trading block.

That’s because traders on Robinhood have emerged as a market-moving power base, and some stocks favored by its users have gone on to post stellar returns. Let’s take a look at three stocks loved by the platform’s users that are worth buying in 2022 and holding for the long term. 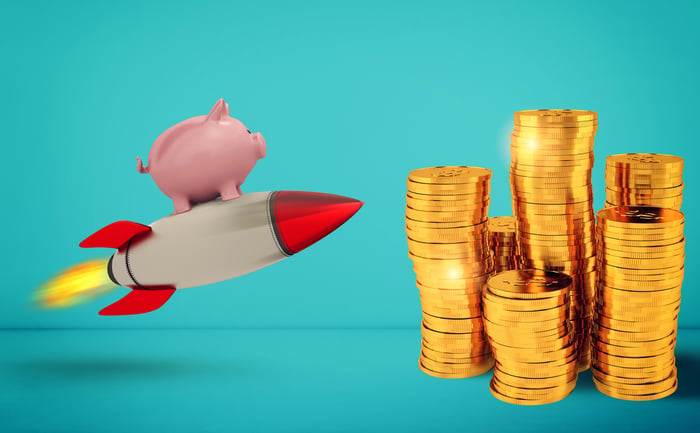 Growth stocks have gotten off to a rough start in 2022, but Amazon (NASDAQ:AMZN) is a dependable business that’s well-positioned to deliver strong returns. The stock is trading down roughly 14.5% from its 52-week high at the moment, and the recent pullback could provide a worthwhile entry point in a company that’s primed to thrive over the long term.

Amazon’s sales surged as pandemic-related conditions spurred demand for e-commerce and cloud services in 2020, and the company still managed to post impressive revenue growth in 2021 despite the challenging basis of comparison and less powerful tailwinds for online retail and internet services. Despite rising shipping costs, other macroeconomic headwinds, and massive investment to continue building out its infrastructure and technology platforms, Amazon still posted significant earnings, reporting operating profits of roughly $4.9 billion in the quarter ended Sept. 30.

The tech giant’s core e-commerce and cloud computing services are poised for more solid growth over the long term, and strong positions in a multitude of other emerging categories could help the business deliver sales and earnings performance that outstrips the market’s expectations. Amazon’s leading e-commerce marketplace and cloud infrastructure have helped it build a digital advertising business that’s on track to be a powerful growth driver, but you can bet that the company won’t be resting on its laurels. Whether it’s artificial intelligence, voice-based operating systems, robotics, or other promising tech trends, Amazon is going to play a huge role in shaping the future.

At a surface level, AT&T (NYSE:T) hardly looks like the kind of stock that’s most associated with Robinhood traders. Far from being an exciting speculative growth play, this is a somewhat boring company that’s going through a major restructuring and trades at low earnings multiples.

It’s no secret that AT&T’s acquisitions push has generally been a huge flop over the past decade. The company significantly overpaid for DIRECTV at a time when the satellite television business was already in decline, and its subsequent acquisition of Time Warner is being undone through a spinoff merger that will combine the entertainment segment with Discovery. With such a disappointing track record when it comes to growth initiatives in recent years, it’s not hard to see why the market is down on the telecom giant.

Even after getting off to a relatively strong start in 2022, AT&T stock still trades near its lowest levels in a decade, and the stock is cheaply priced trading at roughly eight times this year’s expected earnings. Shares also currently yield 7.9%, but it’s important to note that the dividend will likely be cut roughly in half after the Time Warner spinoff is completed in the second half the year.

While the company has a hefty debt load, its core business is still generating very strong free cash flow, and it’s in good position to continue returning cash to shareholders and deliver significant capital appreciation at current stock prices. The company managed to add 1.3 million postpaid wireless subscribers in its fourth quarter, which was well above the average analyst estimate’s call for 968,000 net additions, and the continued rollout of 5G and fiber internet services suggests opportunities for sales and margin expansion.

Even with a substantial payout cut coming down the pipeline, the company’s forward dividend yield will likely be in the range of 4%, and AT&T stock looks attractively valued at current prices.

Airbnb (NASDAQ:ABNB) stock soared after the company reported stellar third-quarter results in November, but market volatility and the spread of the coronavirus omicron variant have dampened the stock’s outlook in the market’s eyes. All of the company’s post-Q3 share price gains have now been erased, and the stock currently trades down roughly 27% from its 52-week high.

For those disappointed with the stock’s recent performance, it’s worth reiterating just how strong the company’s Q3 performance was. Despite continued pandemic-related challenges, Airbnb delivered record results, and the business looks positioned to continue thriving. The company’s revenue climbed nearly 70% year over year in the period, and it was also 36% higher than the previous best-ever quarter that it posted in Q3 2019. Net income also crushed expectations, coming in at $834 million and marking the company’s most profitable quarter ever, up 280% year over year and 213% compared with Q3 2019.

With a market capitalization of roughly $102 billion and the company valued at roughly 14 times this year’s expected sales, it’s fair to say that Airbnb is already a large company with a growth-dependent valuation. However, the business is likely still just scratching the surface of its long-term expansion potential, and the business’s incredible performance amid adversity suggests that the stock is still quite cheap at current prices.

Great Technical Setup on the EUR/USD, Is waiting for the CPI Data to Spark a Movement