ARK Invest founder and CEO Cathie Wood and her various investing funds have been some of the more notable victims of the recent sell-off in growth stocks. Her ARK Innovation ETF (NYSEMKT:ARKK) has lost more than 46% of its value since peaking early last year — and more than half of those losses occurred between early November and today.

Many of these growth companies still hold tremendous potential for investors. Given their prospects for long-term growth — and their now-substantially discounted prices — investors may want to take a closer look at three ARK Innovation holdings in particular: DraftKings (NASDAQ:DKNG), Roku (NASDAQ:ROKU), and Teladoc Health (NYSE:TDOC). Let’s find out a bit more about these three beaten-down Cathie Wood stocks. 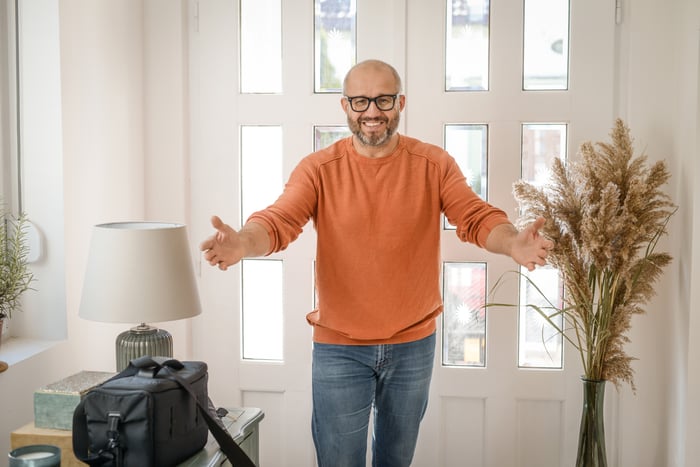 DraftKings specializes in sports betting and fantasy sports leagues, live games, and casino games such as slots and blackjack. It operates in 17 countries and 18 U.S. states — among them, New York, where regulators allowed the state’s first group of online sportsbooks to begin operating on Jan. 8.

The company has not limited itself to gambling. Through a recent partnership with OneTeam Partners and the NFL Players Association, it will launch gamified non-fungible tokens (NFTs) through the DraftKings Marketplace.

Also, in August, DraftKings announced its pending purchase of Golden Nugget Online Gaming for $1.56 billion in stock. This acquisition, which management expects will close in the current quarter, should add 5 million customers to a company that attracted a record 2.1 million monthly unique players in September.

DraftKings booked $823 million in revenue in the first nine months of 2021 — up 181% year over year. Still, its expenses have also risen rapidly, pushing its losses for the period to $1.2 billion, up from just under $1 billion in the prior-year period. However, DraftKings took only a $3 million loss on warrant liabilities in the first nine months of 2021, far less than the $411 million loss on warrant liabilities it reported in the first three quarters of 2020. This was a huge factor in reducing the growth of its overall losses.

Those negative numbers on the bottom line have weighed on the stock for most of the year, and it now trades about 65% below its 52-week high. This has also taken its price-to-sales ratio to 9, down from 23 as recently as September. While the company is likely years away from profitability, today’s relatively discounted share price could provide an opportunity for long-term investors to profit as it expands its market and reduces the growth of its expenses.

Roku continues to benefit from its advertising platform for streaming video programming. Still, its strongest successes have come in its home market of North America, where it has attracted its most substantial market share — 37%, according to Conviva.

Its struggles have come in the international market. Roku has gained a following in the U.K. and has worked to expand across Europe and South America. However, two of the largest platforms it supports, Netflix and Disney‘s Disney+, strive to build the majority of their growth outside of North America. Unfortunately for Roku, peers such as Samsung and Alphabet have made Roku a much smaller player in many regions of the world.

Fortunately, Roku continues to bring in more revenue. Despite its struggles internationally, it reported revenue of $1.9 billion in the first nine months of 2021, a 68% increase year over year, and profits of $219 million, compared to an $84 million loss during the same period in 2020. Lower growth in expenses helped to boost profits.

For the fourth quarter, management forecast revenue of $885 million to $900 million, which would be a 37% year-over-year increase at the midpoint. While still robust, that would amount to a slowdown in growth.

However, investors should also consider that Roku’s share price is down by more than 60% from its 52-week high and off by close to 45% from where it traded in late October. This has taken its price-to-sales ratio to under 10, its lowest level since the market crash in early 2020. Considering that it will still grow rapidly as it increases its market share internationally, investors might want to consider opening positions.

Teladoc was one of the best performers early in the pandemic. As the need for social distancing sent demand for its telehealth services soaring, it became a natural choice for investors. However, a combination of mounting losses and increasing competition has soured investors on the stock. It is now trading nearly 75% below the intraday high of $308 per share it touched early in 2021.

Teladoc goes beyond simply putting doctors in call centers — it offers what it calls “whole person virtual care.” This includes primary care as well as specialty services such as mental health and dermatology, complex care to advise on difficult health situations, and chronic condition management.

Furthermore, though many patients were able and willing to resume in-person doctors visits last year, Teladoc still managed to bring in nearly $1.5 billion in revenue in the first nine months of 2021 — up 108% versus the same period in 2020. However, its bottom-line losses grew by 358% to $418 million. Part of that increase was driven by higher losses on the extinguishment of debt and higher interest costs — and all that red ink has likely weighed on the stock.

Still, management expects just over $2 billion in revenue for the year, which would maintain the current 133% growth rate. Moreover, the company’s price-to-sales ratio has fallen to just over 6.5, its lowest valuation by that metric in five years. Even with continuing losses, Teladoc’s massive revenue growth makes a comeback from this lower valuation appear increasingly likely.