5 Predictions for the Chinese Internet Sector in 2022

Last year proved to be a difficult year for the Chinese tech sector, with internet companies particularly hard-hit by regulations. In its predictions for 2022, KraneShares discusses the difficulties the sector faced last year and how the company believes the sector will grow and change this year.

Regulations impacted many areas of China’s economy last year, but of particular focus was the technology sector and the monopolistic tendencies companies had developed through competition. China was less concerned about the economic impact of regulations as it was with aligning companies and the economy with a political vision that focused on fairness and a prosperous China for everyone.

To that end, KraneShares believes that regulations that still remain for the industry will be fine-tuned, particularly within e-commerce and fintech. The China Securities Regulatory Commission (CSRC) has been more transparent with investors regarding the intentions of the regulations that have been enacted. This has been the catalyst for Wall Street banks upgrading both China and the Chinese internet sector last year.

The Valuation Gap Will Narrow

Investment into China’s internet sector is currently trading at half the multiple of the U.S. internet sector, with valuations driven low by investors’ fears. 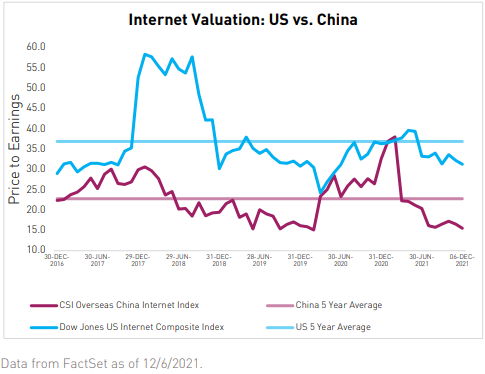 With the fundamentals of the major internet companies within China continuing to be sound, KraneShares believes that the valuation gap will narrow as investors gain confidence in the space once more and risks from policy changes and regulations abate.

E-Commerce Focus Will Shift to Gaining Value From Engagement

The pandemic has affected e-commerce use in China, with rural users catching up to urban use. This growth means that companies within the sector will now need to focus on the value they draw from user engagement versus user growth.

Tencent is positioned favorably with its popular app WeChat, while Alibaba is facing increasing market competition. Anti-trust laws now allow for merchants to list across a variety of e-commerce platforms, and this has led to increasing competition for the internet giant from various corners of the market such as Kuaishou and Douyin, the TikTok equivalent in China.

Expansion of the Internet Sector Into Cloud and Metaverse

“Outside of E-Commerce, we believe cloud and the metaverse will be the next frontier of growth for internet companies, especially Alibaba, Tencent, and Baidu,” write the authors.

The rapid growth of autonomous driving in China as well as 5G are both bringing a host of new consumers to the cloud space for data storage. If the metaverse coalesces, Baidu, Tencent, and Alibaba are all positioned to launch metaverse products that combine the technical aspects of their platforms with the established user base of each. All three companies are poised to become giants within the Chinese metaverse.

Chinese Companies Will Continue to Relist in Hong Kong

January 1, 2022, started the three-year clock for U.S.-listed Chinese companies to provide their audit papers for inspection, something currently forbidden by Chinese regulations but demanded by U.S. regulations. If an agreement is not able to be reached within this window, Chinese companies would be forced to de-list from U.S. markets by the end of 2024 or beginning of 2025.

In an effort to position themselves favorably in any outcome, all of the Chinese tech companies are currently either considering or have already begun the relisting process in Hong Kong. KraneShares anticipates this process to continue or even increase, as these companies have no desire to become a “political football that China or the U.S. can kick around to make political statements,” write the authors.

The popular KraneShares CSI China Internet ETF (KWEB), which experienced astronomical inflows last year as investors looked to move into the space at value prices, is poised to capture growth and increasing valuations within the sector in 2022.

Passive Investing Up In India; Total ETF AUM Up Nearly 40%

Two income strategies to protect and grow wealth in the market