This month Bayer forged a deal with privately held Mammoth Biosciences, and Pfizer announced a partnership with gene editing company Beam Therapeutics (BEAM). Collectively, the deals are worth about $2.75 billion in upfront and milestone payments. They allow the pharma giants to access cutting edge gene-editing technology.

“I do see the field as generally at an inflection point,” said Beam Chief Executive John Evans. “And I think we’re really at the beginning innings of seeing what’s possible with gene editing as the technology improves — like base editing — but also as the delivery improves as well.”

Last year, Intellia Therapeutics (NTLA) sparked interest in the field with its plans to take on two liver diseases. While Crispr altered cells outside the body, Intellia changed genes inside people — and CRISPR stocks rocketed. It was a first in this field; other companies hope to follow Intellia’s lead. Editas Medicine (EDIT) has also edited genes inside people, but those results were localized to the eyes in a blindness-causing disorder.

“People analogized (Intellia’s test results) with Neil Armstrong going to the moon for the first time because no one had done that before,” RBC Capital Markets analyst Luca Issi told Investor’s Business Daily.

It’s been a decade since Jennifer Doudna and Emmanuelle Charpentier developed the technology known as CRISPR. Using a pair of molecular “scissors,” they found they could cut into the human genome and change the DNA at the center of some diseases.

There’s a massive array of potential uses for CRISPR, which stands for Clustered Regularly Interspaced Short Palindromic Repeats. The process is adapted from a naturally occurring genome editing system in bacteria.

At least 5,000 diseases are caused by a single mutation in one gene. Besides correcting those mutations, CRISPR companies also are working on treatments for more common diseases like cancer, diabetes and heart conditions.

CRISPR can be used in two ways — so far. Crispr, the company, and Editas have tested in people drugs that utilize cells edited outside the body. This is called ex vivo editing. Intellia, on the other hand, is the first to use in vivo editing, or changing genes inside humans.

What role will Big Pharma play in this field? In the Pfizer deal with CRISPR stock Beam, the companies will test out Beam’s base editing approach. They plan to use CRISPR to treat three diseases of the liver, muscle and central nervous system. Base editing uses the same molecular scissors, but unlike traditional gene editing, it cuts just one strand of DNA’s double helix.

RBC analyst Issi is cautious about the Big Pharma move.

“What keeps us up at night on gene-editing?” Issi said. “No. 1: Safety. No. 2: Safety. No. 3: Safety. This is a fantastic technology. It could be really disruptive and could potentially change the way we treat many diseases from being chronic diseases to being one-and-done.”

Meanwhile, the other Big Pharma player, Bayer, will use Mammoth’s toolkit, which includes “ultrasmall” enzymes. This allows delivery of the gene-editing drug inside a virus emptied of its harmful properties. Other gene-editing drugs usually are delivered inside fat droplets called lipid nanoparticles.

“We are very much focused, of course, on safety and we want to make absolutely sure the editing is going to be accurate, that there won’t be off-target effects, that the (potential for unintentionally triggering the immune system) is low,” she said.

Is Gene Editing A One-And-Done Cure?

Still, all agree the one-and-done potential of CRISPR is an attractive prospect.

Take sickle cell disease. CRISPR stocks Crispr, Editas and Beam are all targeting it. In this disease, the protein that carries oxygen throughout the body is deformed. That causes a number of problems, including episodes of pain called vaso-occlusive crises. 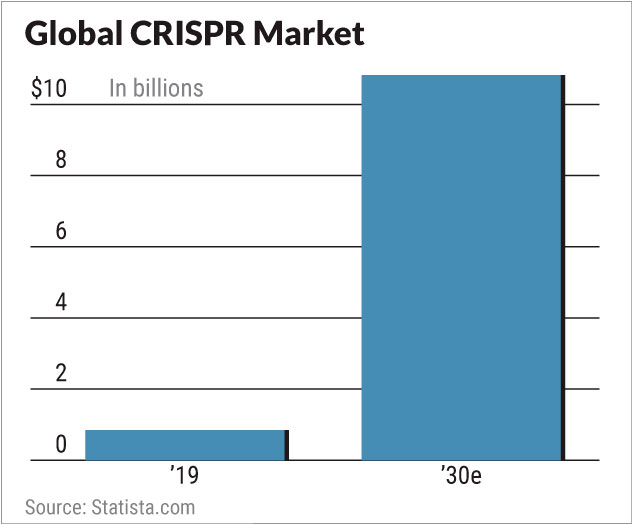 Existing treatments are costly. In 2020, a drug from Global Blood Therapeutics (GBT) called Oxbryta cost $127,000 per year, according to the Institute of Clinical and Economic Review. Over 10 years, that would run a patient $1.27 million. And a patient could be on treatment much longer than a decade.

Big Pharma and CRISPR stocks are hoping to change that. A gene-editing cure could easily win $1 million in revenue per patient — depending on the cost to treat a chronic disease over time.

“The notion of medicine is going to change,” Crispr CEO Kulkarni said. “You’ve gone from a pill a week or a pill a day to one-time procedures that are cures.”

“What proportion of therapies in 10-15 years are going to be single-shot, one-time cures?” he asked. “I think the answer is it will be a lot more than today. It’s a huge trend in medicine and I’m confident our technologies are going to be a big part of that.”

Evans says 2022 will be transformational for Beam. Before the end of the year, the company expects to dose the first patient in its sickle cell disease study. Like Crispr, Beam is testing an ex vivo approach to the blood disease.

It’s also working on five other candidates expected to be in human or laboratory tests by the end of the year. Of those five, three will be ex vivo editing drugs. But two will be in liver disease treatment using in vivo approaches.

That’s where Loncar sees huge promise for gene editing stocks. In June, Intellia and its partner Regeneron Pharmaceuticals (REGN) provided the first look at in-human test data for an in vivo gene-editing treatment. They targeted transthyretin amyloidosis, a disease in which abnormal protein builds up on the nerves and heart.

On average, the drug led to an 87% reduction in the buildup of that protein on patients’ nerves.

Loncar, in an interview, called it “the most exciting data of any biotech company.” In response, shares of CRISPR stock Intellia skyrocketed more than 50% in a day. This year, Intellia expects to have the results from a test in patients with the heart component of the same disease — a much bigger market. It’s also working on another liver disease called hereditary angioedema.

“I have no reason to believe that data will not be compelling,” RBC’s Issi said.

Intellia was the first gene editing company to have in-human data for an in vivo gene editor. 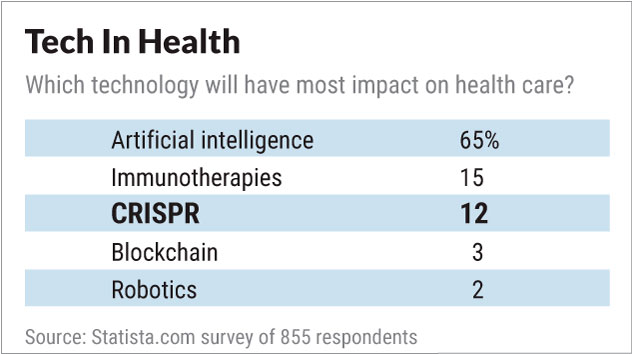 “We take that leadership position very seriously,” CEO John Leonard said in an interview. He added, “We know that missteps can affect the pace of development of the technology. We believe that if it’s done right, the technology will go very far.”

If successful, Intellia’s transthyretin amyloidosis treatment would rival drugs from two significantly bigger names: Pfizer and Alnylam Pharmaceuticals (ALNY). Pfizer makes Vyndaqel and Vyndamax, a pair of drugs to treat the heart condition. Alnylam sells Onpattro, a treatment for the nerve side.

So far, Intellia has tested gene editing technology that turns off the genes responsible for problematic proteins. Now, it has a new question: Can you add a corrected gene to the genome? It will test that question in hemophilia B with Regeneron. The blood disease is due to deficient clotting protein caused by a mutated gene. Intellia also is working alone on a lung disease caused by another deficient protein called alpha-1 antitrypsin disease.

“It’s one thing to inactivate it, but can you restore protein function?” Leonard said.

That’s all on the rare-disease side. There’s also an opportunity to use CRISPR gene editing technology to make dramatic changes to more common diseases like cancer, diabetes and heart conditions, Crispr CEO Kulkarni said. In these diseases, companies will use ex vivo approaches to edit cells outside the body.

For example, all of the companies are training immune cells to seek out and destroy cancer.

Unique programs also are at play. Crispr Therapeutics is partnered with privately held ViaCyte to test out an artificial pancreas. They hope to train cells to take on pancreatic function in Type 1 diabetes patients. The lifelong condition requires frequent insulin injections or body-worn insulin pumps.

Ex vivo editing does face a key challenge, however. Cells must be edited in a way to prevent the immune system from recognizing them as foreign and then attacking.

“We are using CRISPR to do edits to those cells to make them stealthy,” CEO Kulkarni said of the diabetes program.

Original CRISPR stocks Crispr, Intellia and Editas — and other gene editing stocks that follow, including Big Pharma — face a high bar. The scientific community doesn’t know how durable gene-editing treatments will be. It’s one thing to promise a one-and-done cure. But the technology hasn’t existed long enough to bear that out in clinical testing.

The CRISPR gene-editing field “is still in its infancy, but I think it’s going to solve a lot of problems and change the way we do things in the future,” he told Investor’s Business Daily.

All three big-name gene-editing stocks rocketed during 2020. But only Intellia maintained those gains in 2021. Loncar says there was a bubble “and it burst big time.”

The bubble came in lockstep with a large investment from Ark Investment Management, the firm led by Cathie Wood. Wood snapped up shares of CRISPR stocks. Further, CRISPR inventors Doudna and Charpentier won the Nobel Prize in chemistry in 2020, drawing attention to the gene editing technology.

And retail dollars came flooding in — until 2021. While Intellia stock gained 117% last year, Crispr and Editas crashed a respective 50% and 62%. Meanwhile, Beam shares only dipped a fraction.

This year, Loncar hopes to hear from the newer CRISPR companies, many of which are private. On that front, the deal between Bayer and Mammoth could be especially telling. Bayer’s de Backer says Mammoth fits into the company’s efforts to transform itself by acquiring or partnering with pioneers in new technology, gene editing included.

“We’re finding ourselves in a very special time in history,” de Backer said. “As an industry, we have to look for other ways to really achieve results in areas of high unmet medical need. These areas of proteonomics, cell therapies, gene therapies, gene editing allow us to attack diseases in a different way. Until five to 10 years ago, a lot of these things were not possible.”

Short-Term Trades Can Add Up To Big Profits. IBD’s SwingTrader Shows You How

Looking For The Next Big Stock Market Winners? Start With These 3 Steps