Yesterday’s session was the strongest of the bullish momentum for the GBP/USD currency pair, as it jumped from the 1.3620 level, during an upward rebound. It reached the resistance level 1.3715, its highest in two and a half months, and with factors supporting the gains of the sterling, there was downward pressure on the US dollar after disappointment. The last hope is from the content of the comments of US Federal Reserve Governor Jerome Powell, although the results of economic data are still in favor of expectations for the future of raising US interest rates.

Forex experts see the recent performance of the British Pound as “resilient” as they expect the currency to continue to outperform its major peers over the coming weeks and months. The British pound was one of the best performing G10 currencies in the first week of 2022, buoyed by the loosening of positions and expectations of a rate hike in February. They found that further outperformance could be expected if these two issues continued to arise over the coming weeks.

The market is now anticipating a 75% chance of a second rate hike coming from the Bank of England at its February 3 policy meeting, and the odds of that in turn have been boosted by expectations that the US Federal Reserve will be more “hawkish” in 2022. Therefore, expectations for a rate hike cycle  faster interest rates by the Federal Reserve provide the Bank of England with welcome cover to pursue its own rate hike agenda.

Inflation in both the United States and the United Kingdom is at multi-year highs, and policy makers have warned that the pandemic-driven price increase is not as temporary as many economists expected at the start of 2021. It appears that the market thesis is higher interest rates in the US mean higher rates in the UK, which in turn supports the pound. The Bank of England’s February rate hike will be the second in just two months. The number of hikes to be offered in 2022 overall could be a deciding factor in determining how high the pound can go.

It is likely that investors will continue to exit the net selling positions that have accumulated against the pound in the coming days and move the market to a more balanced state. However it will only happen when a “long” position builds up – as seen in the early part of 2021 – that the situation will start to become a headwind for the UK currency.

According to the technical analysis of the pair: On the daily chart, the price of the GBP/USD currency pair has breached the upper line of the current ascending channel. This occurrence is a strong support for the bulls to move towards the resistance level 1.3675. The success of breaking the resistance 1.3836 will motivate the bulls to move towards the psychological resistance. This will depend on the future of continued selling of the US dollar, sentiment towards the new Corona variable, and hints of the future of monetary policy tightening for both the Bank of England and the US Federal Reserve.

Today the focus will be on the US data, the Producer Price Index, and the weekly jobless claims number. It must be taken into consideration that technical indicators have begun to give overbought signals. 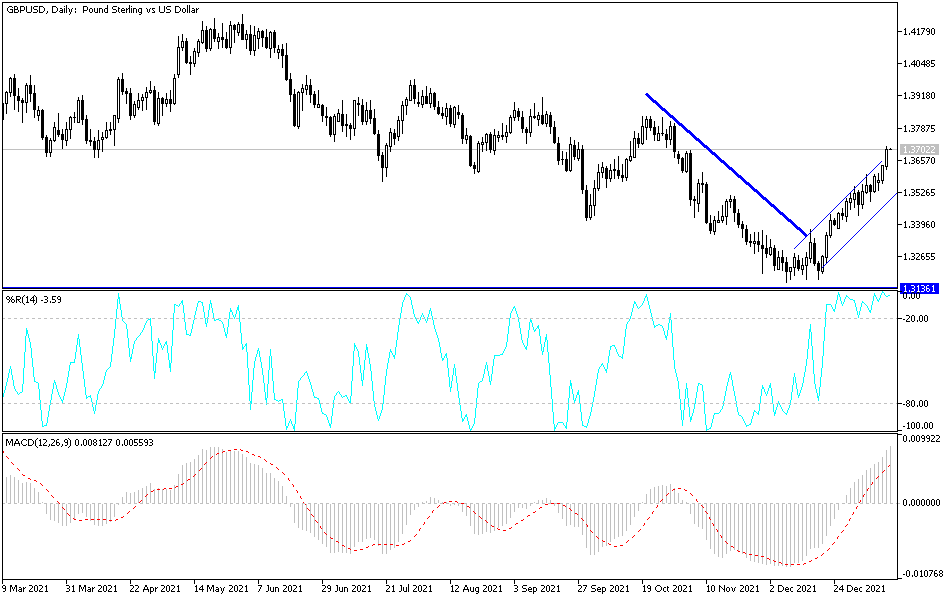 Here's what may save the stock market as Powell removes the Fed put, according to a strategist