0
SHARES
0
VIEWS
Share on FacebookShare on Twitter
Gold prices closed at $1,825.15, after placing a high of $1,828.05 and a low of $1,814.55. Gold surged for another session on Wednesday, and continued its bullish streak for the fourth consecutive session. Gold was strong on Wednesday, after the data from the US showed that inflation fell within the projections, and dented the greenback, which prompted investors to buy the precious metal, as they have already priced in the upcoming interest rate hike by the US Federal Reserve.

The US Dollar Index, which measures the value of the greenback against a basket of six major currencies, dropped sharply on Wednesday, all the way down to 94.91. This was the lowest level seen by DXY since November 12. The US Dollar Index fell to its lowest level in two months, below 95, which added great support to the rising prices of the precious metal on Wednesday.

The US Treasury Yields, on a benchmark 10-year note, also slipped, coming in at 1.71% during early trading hours on Wednesday. However, yields managed to find support and reversed their course to close its session with minor gains at 1.75%. The Dollar and Yield both retreated, due to the release of the latest Consumer Price Index data. Although the data came in favor of the currency, it was not surprising, as markets had already predicted the same, and even this move has already been priced, which ultimately dragged the dollar to the downside, as investors started booking profits.

The Federal Reserve watches the CPI Index closely, to determine the timing for the first pandemic-era interest rate hike. In March 2020, the Fed dropped its interest rates to almost zero, after the outbreak of the coronavirus pandemic. The central bank has signaled that it will increase interest rates as much as three times this year, and the first hike is expected to come between March and June.

In 2020, the US economy contracted by 3.5%, due to the lockdowns and other disruptions caused by the COVID-19 crisis. However, in its latest projections, the Central Bank has projected a growth of about 5.5% in 2021 and 4% for 2022. The main issue faced by the Federal Reserve is the inflation running at the highest levels in four decades, as the prices of almost everything have surged, due to the higher wage demand andthe disrupted supply chain caused by the pandemic-induced lockdowns.

Gold always declines after news of an interest rate hike; however, if the inflation remains strong through 2022, gold could push higher, to its  record highs of 2020, above $2,100. The worries about increased prices will raise the safe-haven demand, and it will eventually have a negative impact on the US dollar, as the United States has spent trillions of dollars on pandemic relief, which was the cause of the price pressures.

The precious metal, gold, is trading at 1,826, with a strong bullish bias, having violated the resistance level of $1,815. This level is acting as a support for gold. Further to the upside, the next resistance remains at 1,832, and a break above this could lead the gold price towards the 1,845 level. 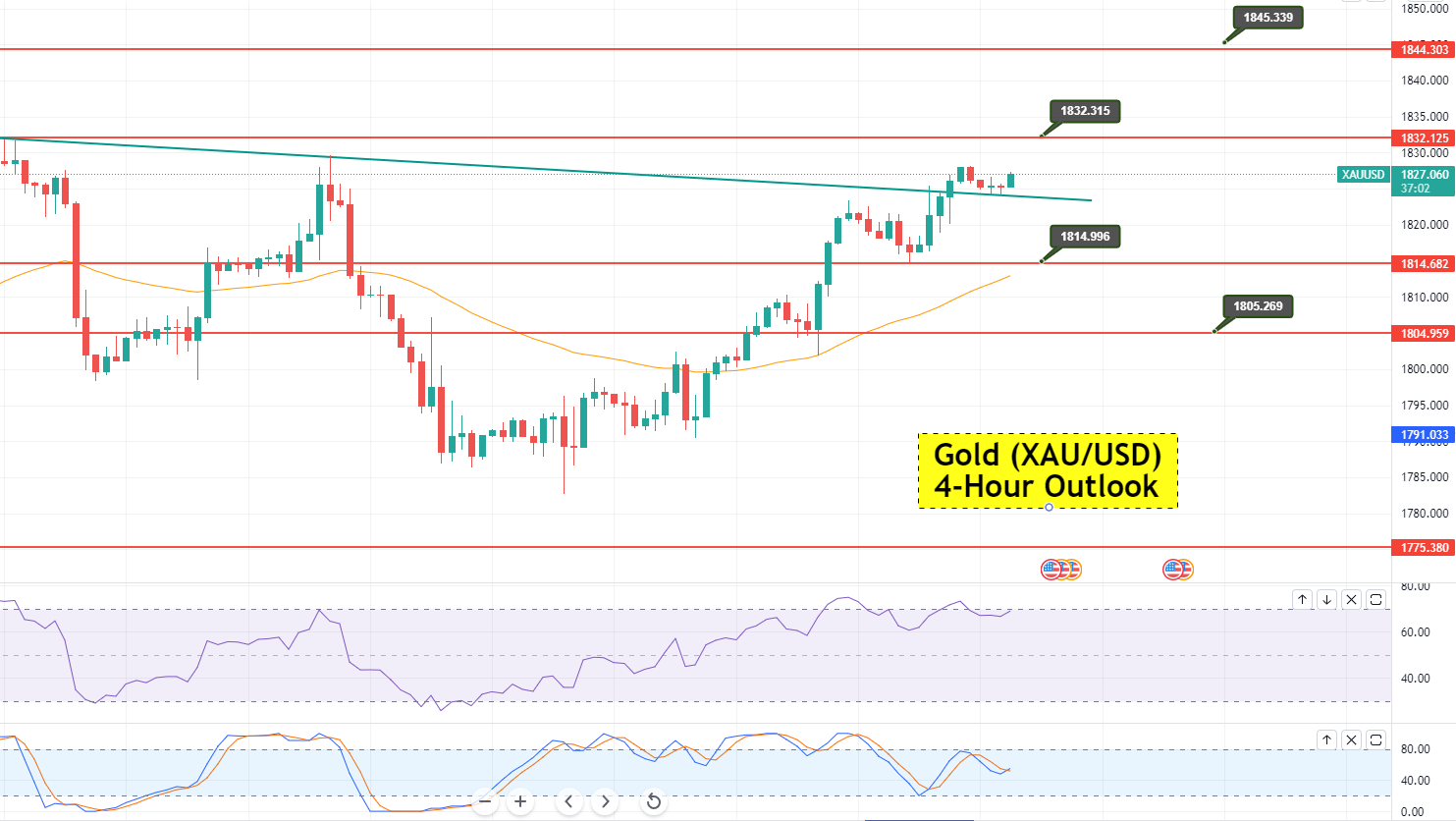 Analysis-U.S. energy shares on fire again to start 2022, stoked by inflation By Reuters