Strength beyond 100-DMA/0.7300 will set the stage for further gains

The AUD/USD pair gained strong positive traction and recorded its best percentage gain since October, hitting a near two-month high on Wednesday. The US dollar witnessed aggressive selling following the release of the latest US consumer inflation figures, which was seen as a key factor that provided a goodish lift to the major. The headline US CPI rose 0.5% MoM in December as against consensus estimates pointing to a reading of 0.4%, down from 0.8% in the previous month. This was enough to push the yearly rate to 7%, or the highest level since June 1982. Adding to this, core inflation, which excludes food and energy prices, surpassed expectations and accelerated to a 5.5% YoY rate, marking the biggest advance since 1991.

The data reaffirmed market expectations that the Fed will begin raising interest rates in March, though was not deemed worrying enough to change an already hawkish outlook. This comes on the back of Fed Chair Jerome Powell’s less hawkish comments on Tuesday and exerted heavy downward pressure on the buck. During his renomination hearing before the Senate, Powell said that it could take several months to decide on running down the central bank’s balance sheet. This helped ease fears about a sudden withdrawal of monetary support and boosted investors’ confidence. This was evident from a generally positive tone around the equity markets, which further undermined the safe-haven greenback and benefitted the perceived riskier aussie.

The pair finally settled near the top end of its daily trading range and held steady through the Asian session on Thursday, with bulls now awaiting a sustained strength beyond the 0.7300 mark. As investors digest a surge in the US consumer prices, the cautious market mood held back traders from placing fresh bets and acted as a headwind for the major. Market participants now look forward to the US economic docket, featuring the release of the Producer Price Index (PPI) and the usual Weekly Initial Jobless Claims. This, along with Fed Governor Lael Brainard’s testimony on her nomination as Vice-Chair, will influence the USD. Traders will further take cues from the broader market risk sentiment for some short-term opportunities around the pair.

From a technical perspective, the pair was last seen flirting with a confluence barrier comprising of the 100-day SMA and the 50% Fibonacci retracement level of the October-December downfall. A sustained strength beyond will be seen as a fresh trigger for bullish traders and set the stage for additional gains. The pair might then accelerate the move towards the 61.8% Fibo. level, around the 0.7340-45 region en-route the 0.7400 mark and the very important 200-day SMA, around the 0.7415 region.

On the flip side, the 0.7260-55 zone now seems to protect the immediate downside ahead of the 0.7210-0.7200 region. A convincing break below will negate the positive outlook and prompt some technical selling. The next relevant support is pegged near last week’s swing low, around the 0.7130 region, which if broken might turn the pair vulnerable to break below the 0.7100 round-figure mark. The downward trajectory could further get extended towards the 0.7060-55 intermediate support before the pair eventually drops to the key 0.7000 psychological mark. 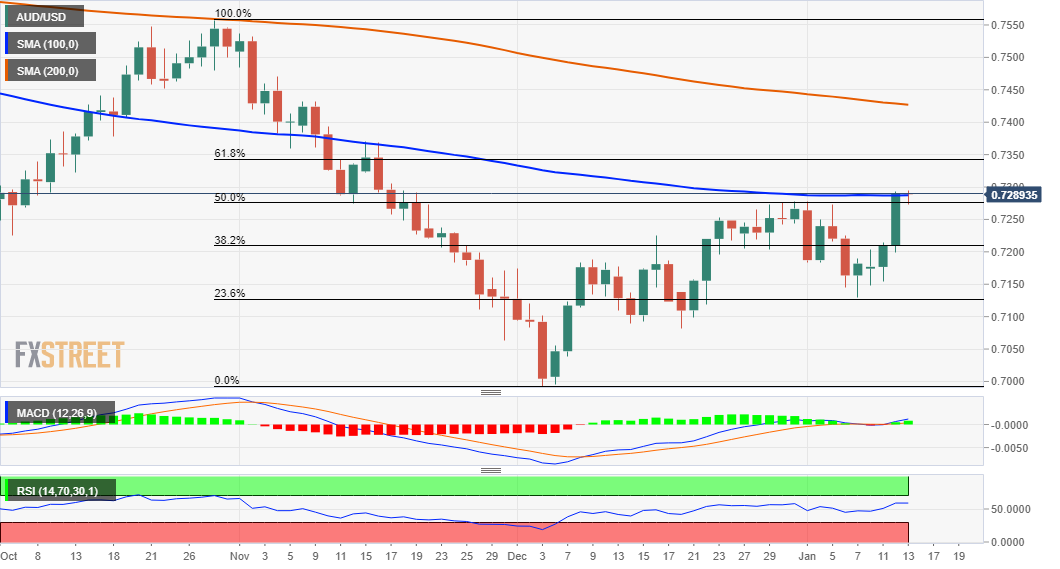