Why Have Stocks Been So Volatile?

It’s been a rough start to the year for both the stock and bond markets, but this fits in with what many analysts had expected would be a bumpy 2022 for investors. The air pocket just happened to come a lot sooner than expected.

The most expensive corners of the markets were those that took the hardest punches before a bounce on Tuesday. While the Morningstar U.S. Market Index lost 2.4% in the first 10 days of the year, the Morningstar U.S. Technology Index lost 5.3% to start, and all categories of fast-growing stocks lost north of 7%. Meanwhile, value stocks and sectors such as energy and financials rallied strongly. Bond prices fell, with the Morningstar Core Bond Index losing 1.6% to start the year. 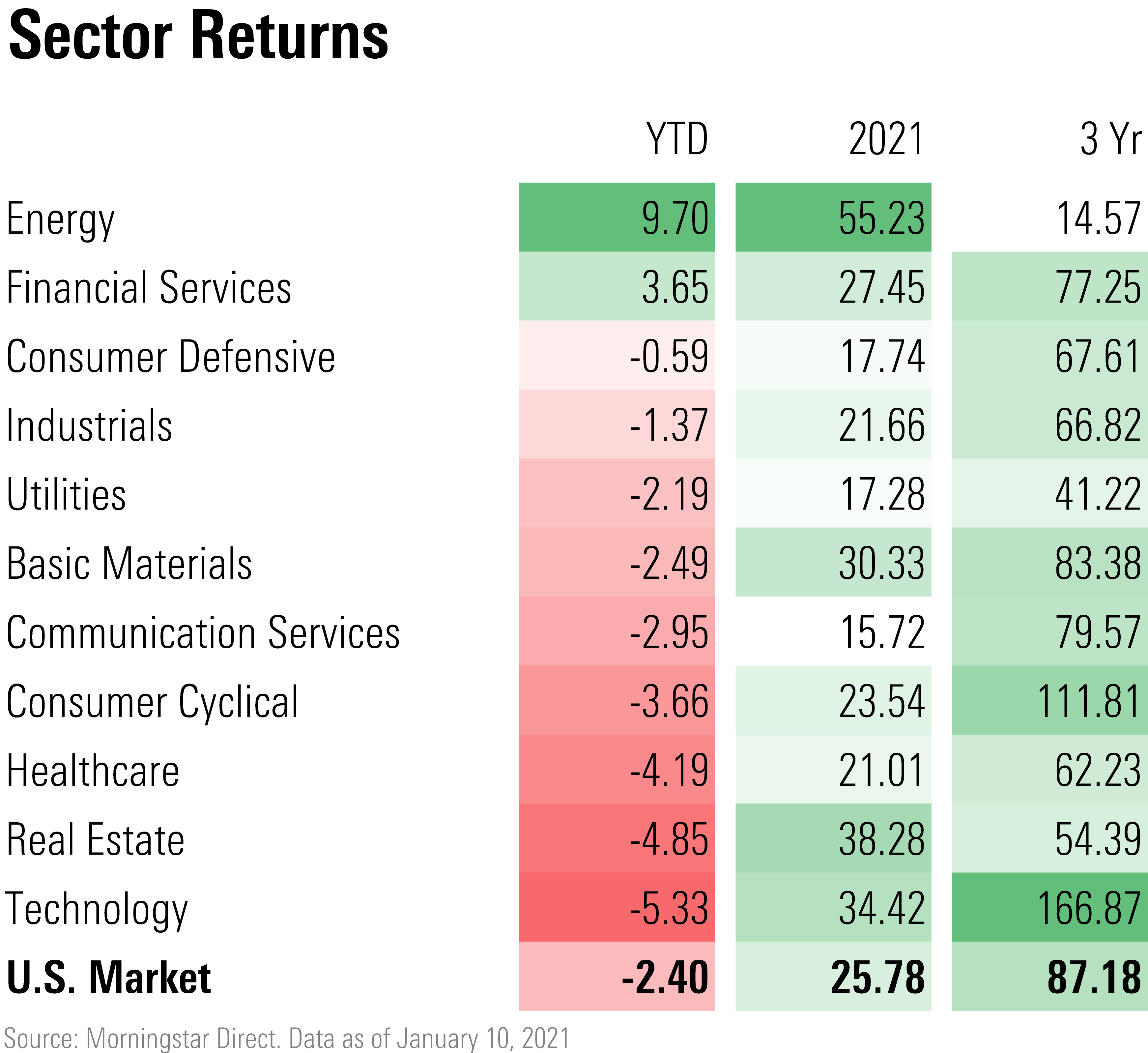 In fact, the performance dynamic that has played out in the first few days of 2022 is very much in line with what Morningstar’s Dave Sekera and other Wall Street stock market strategists had predicted would be in store for investors this year. “It just all happened in the first 10 days,” says Lori Calvasina, head of U.S. equity strategy at RBC Capital Markets. 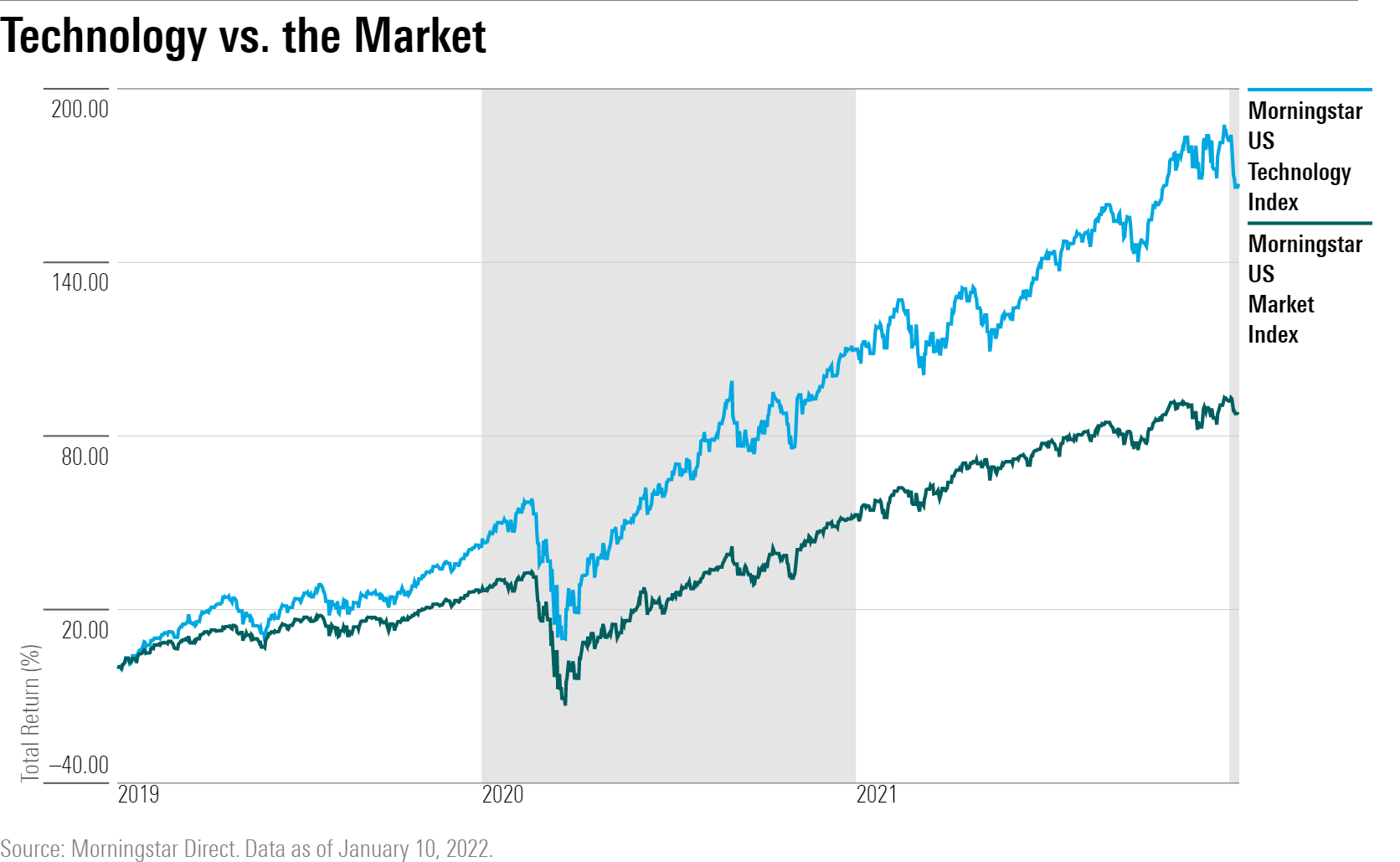 It all ties back to the relationship between the markets, the Fed, and the economy.

The jolt to the markets came courtesy of accelerated expectations around the Federal Reserve’s response to surging inflation and a tight labor market.

As recently as Thanksgiving, the Fed wasn’t expected to start raising interest rates until May or June and to only raise rates twice in 2022. Then came the December Fed policy meeting, where the Fed signaled a hard pivot toward a more aggressive pace of interest-rate increases in 2022 in response to a strengthening job market and unexpectedly stubborn inflation pressures.

There was little response from the markets in December, but that changed this month. The determination of the Fed to raise rates was made clearer on Jan. 7 with the release of minutes from that December meeting. Now, financial markets are predicting that liftoff will come in March in terms of rate increases and, more broadly, that the Fed is going to be faster to reverse the easy money policies put in place when the pandemic hit. 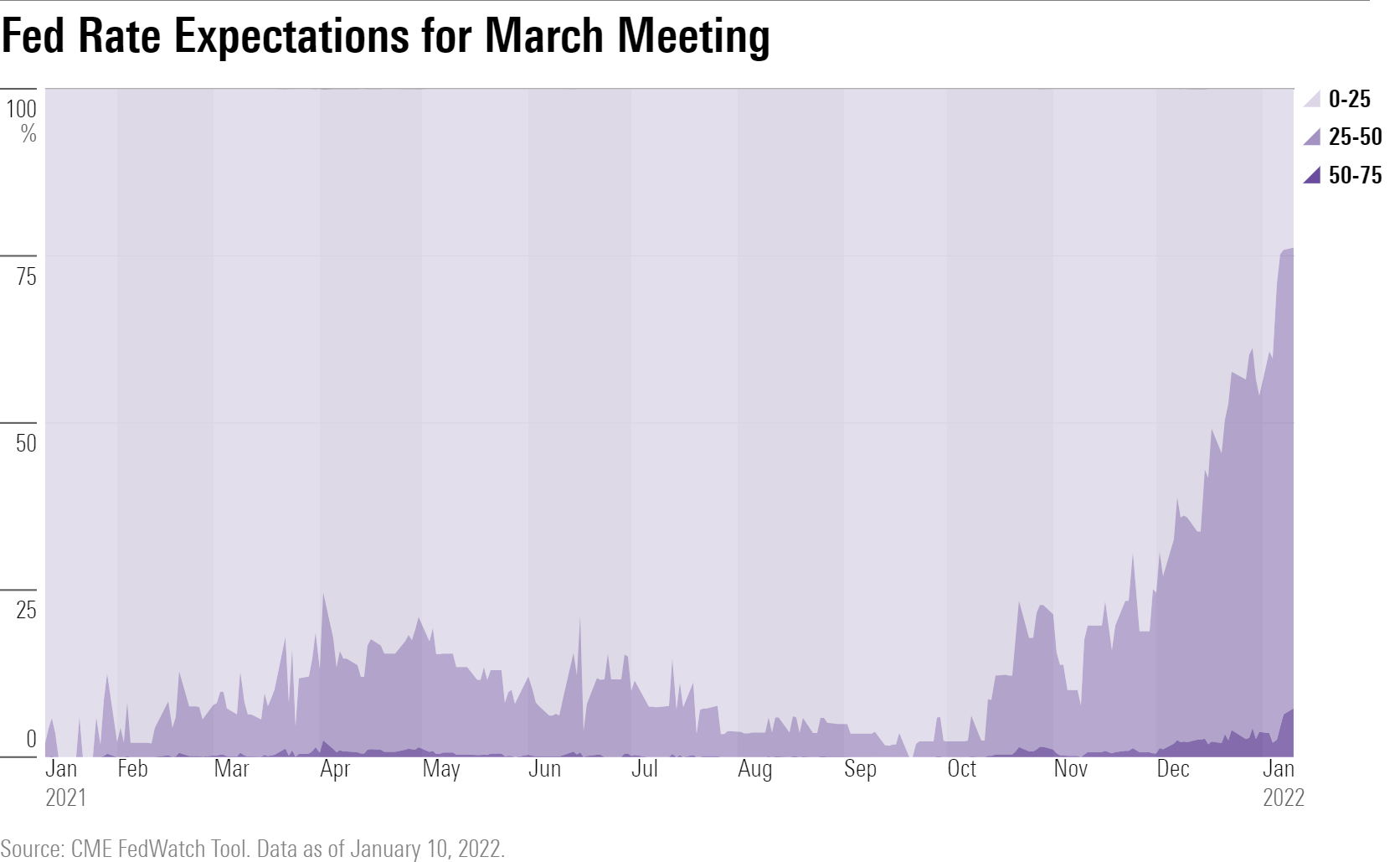 These easy money policies from the Fed, coupled with money flooding the economy from fiscal stimulus programs out of Washington, had been a key force in the stock market’s 2021 rally, says Jurrien Timmer, director of global macro at Fidelity Investments. “Now that liquidity tide is going back out to sea,” he says.

Warren Buffett’s famous quote–“you only find out who is swimming naked when the tide goes out”–certainly applied at the start of the year. “The market was broadly overvalued coming into 2022, especially in the growth and core categories, which have pulled back the most year to date,” says Sekera. 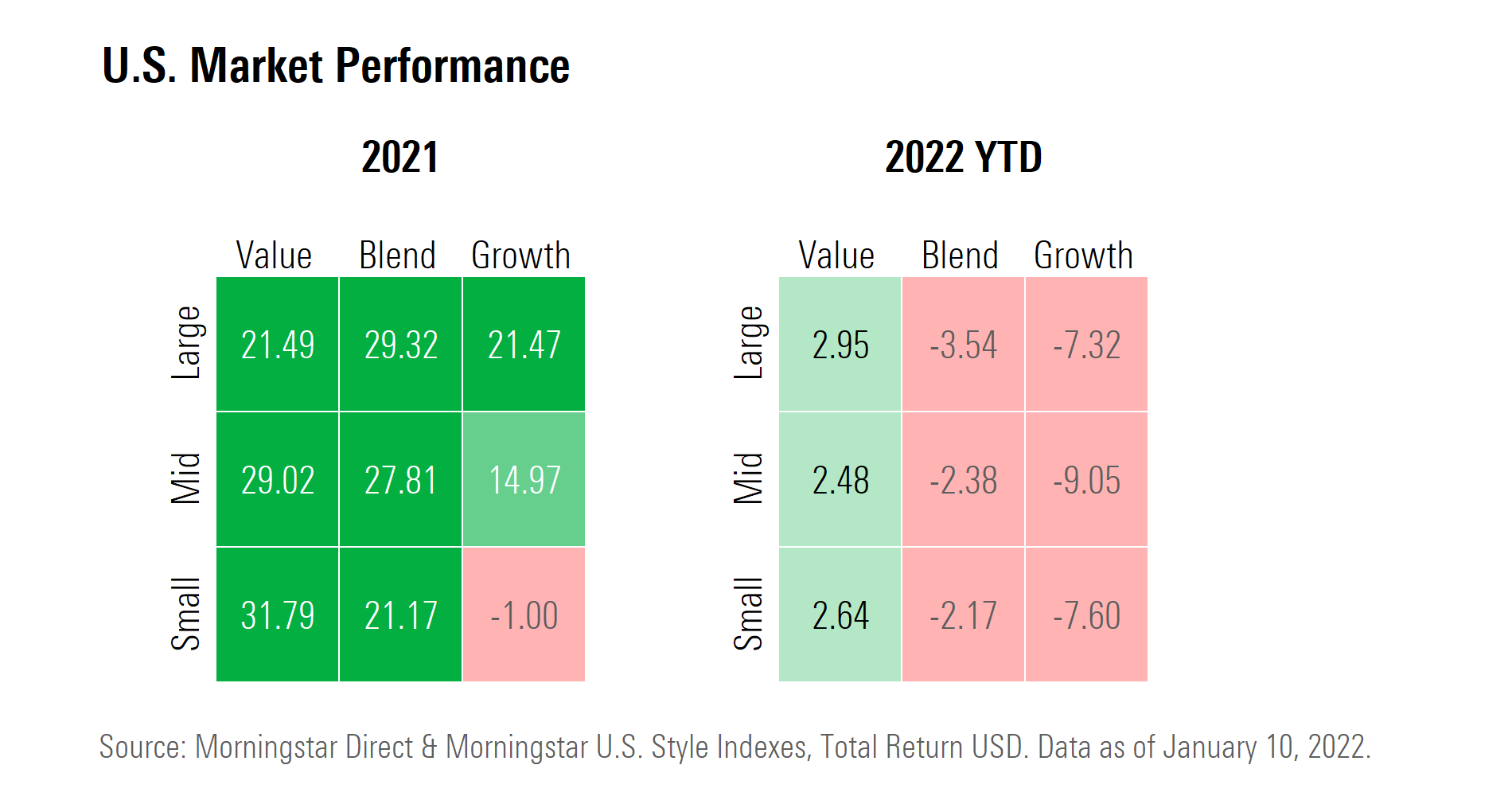 RBC’s Calvasina says this rotation out of growth stocks and into value stocks fits the historical pattern around Fed tightening. “What you see in almost every cycle is that ahead of liftoff by the Fed, you get this burst of outperformance by value sometimes–sometimes a little before and then sometimes after.”

While the markets seemed rattled by the more aggressive posture from the Fed, Timmer says it is important to take a longer-term view of Fed policy. By historical standards, monetary policy is exceptionally stimulative at a time when inflation is running well above average and the employment rate is extremely low. “There is no justification for where the Fed is now,” he says.

And looking forward, expectations are that the Fed will stop raising rates when the federal-funds rate is at 2% (versus essentially zero right now), Timmer notes. “If the Fed goes to 2%–the Fed would still be accommodative,” he says. 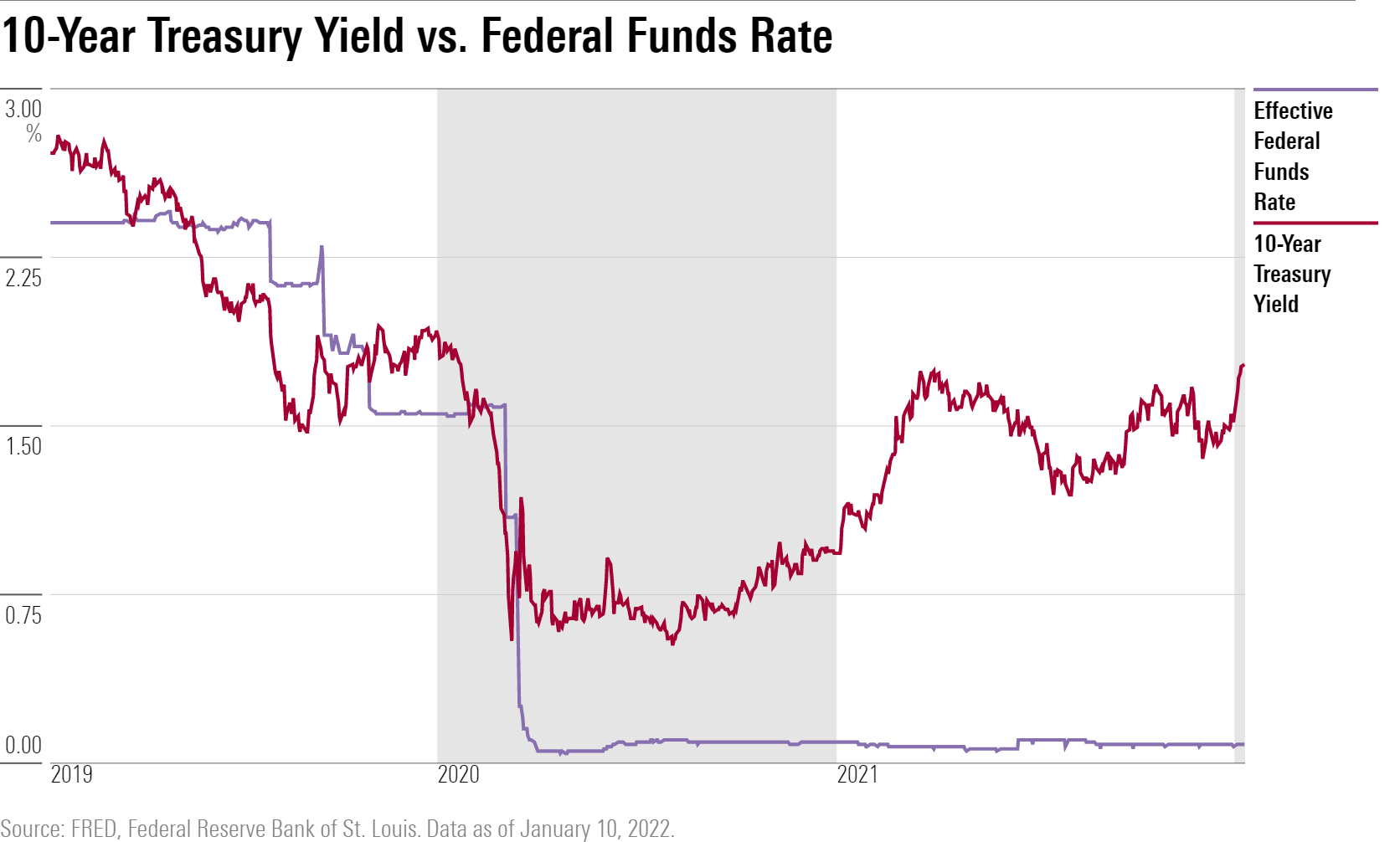 Against this backdrop, “We’re in a period where the market doesn’t go up in a straight line,” the way it was for much of 2021, says Timmer. Instead, “It will be more often interrupted by the kind of tantrum we’ve been seeing.” Earnings growth will be strong enough to support single-digit returns on stocks for 2022, “but under the surface there will be a lot of churn.”

One dynamic that Timmer expects is a continued broadening of stock market leadership from just a handful of technology stocks–like the so-called FAANG market (Facebook [now Meta], Amazon.com, Apple, Netflix, and Google). “In a way, that’s a healthier market than when it’s being led by a handful of trillion-dollar companies,” he says.

Typically, she says, value outperformance begins to fade during the Fed rate cycle as the market begins to look ahead to economic growth moderating in response to higher interest rates. As the market anticipates that slowing of economic growth, investors then turn their attention back to growth stocks. “You see a fit of value leadership and then growth takes over.”

It is a similar story where small stocks will outperform heading into a rate-hike cycle–as the Fed tightens, large caps will start to outperform. “Small cap dies in the middle of a Fed tightening because the markets sniff out that the economy is going to slow,” Calvasina says. “It’s the same reason you see the market flip from cyclicals to technology–tech has become a chicken way to play defense.”

But given the rapidity with which the market can switch gears, she says a fairly balanced portfolio may be wise–“and not try to chase all these twists and turns.” 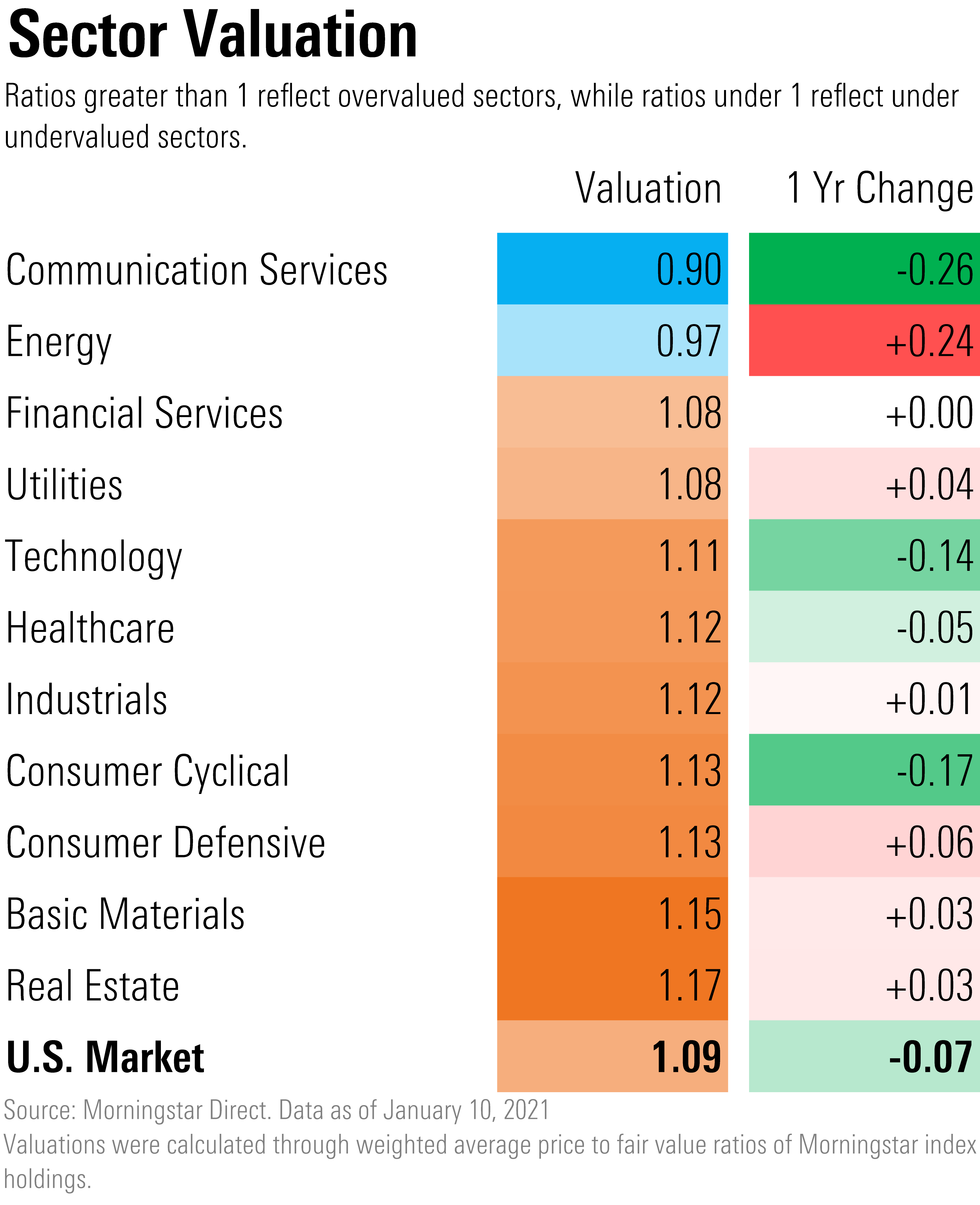 These 3 Stocks Could Pay Massive Dividends in 2022