– GBP rallies on Vlieghe comments
– But some weakness seen in short-term data
– “We’re seeing a consumer recovery, but no boom” 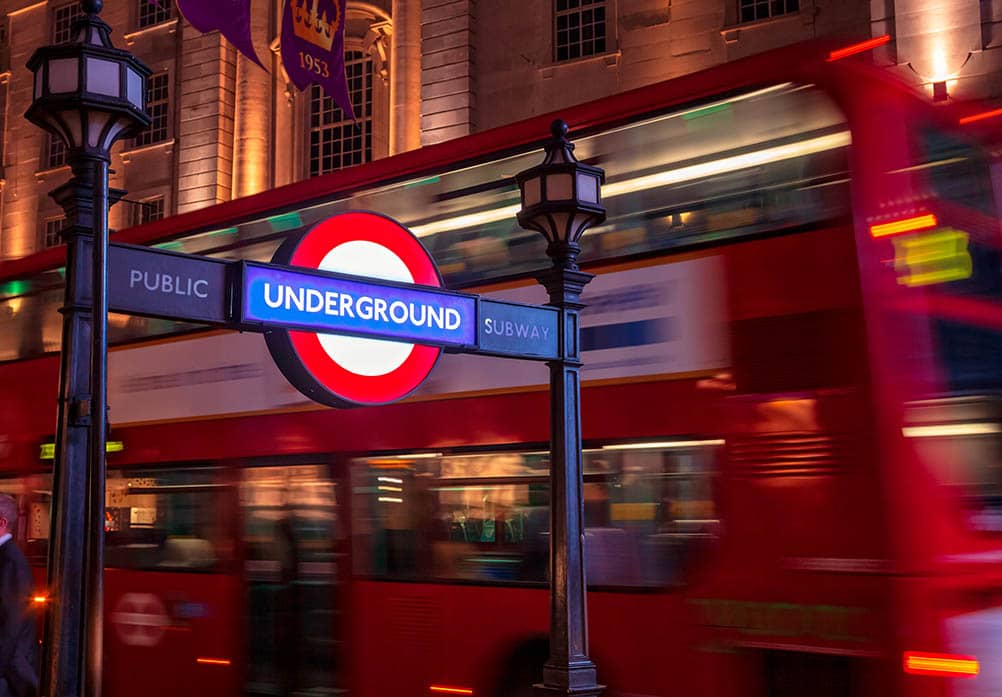 The British Pound found a steadier footing ahead of the weekend after a member of the Bank of England warned that an interest rate rise might be required sooner than the market currently expects, but gains could prove limited owing to some disappointing short-term data releases.

Gertjan Vlieghe, who sits on the Bank of England’s (BoE) Monetary Policy Committee, said that he expects a rate rise to occur around the end of 2022 in line with current market expectations.

However, he added that should the ending of furlough in September result in only a modest uptick in unemployment then the timing of that rate rise might need to be sooner.

Vlieghe is a noted ‘dove’ on the Monetary Policy Committee (MPC), meaning he is more likely to err on the side of caution when it comes to raising rates. Markets therefore latched onto the comments as a signal a potential shift in stance was underway at the MPC.

“With the Fed and ECB remaining hesitant, the pound could resume its climb higher versus other major currencies should the BoE continue hinting at removing accommodation,” says Paul Spirgel, a Reuters market analyst. 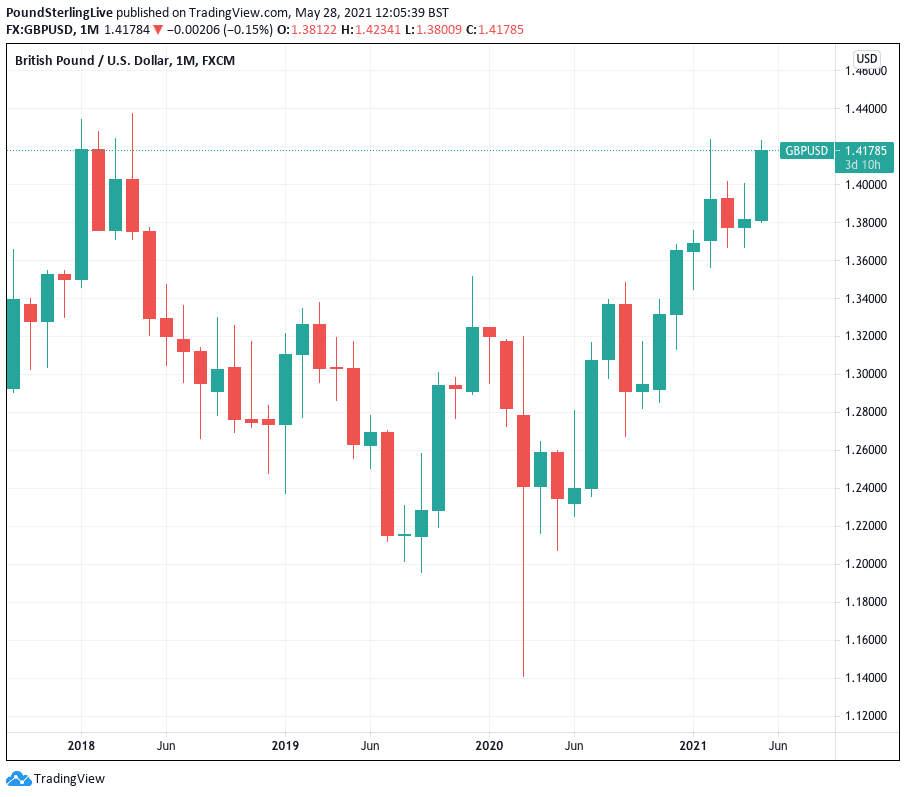 Above: GBP/USD approaches highest levels since 2018.

Sterling went as much as half a percent higher against the Euro and Dollar in the wake of the speech, but gains were as high as three-quarters of a percent against the Yen and Franc.

The market seems to have come to the view that Vlieghe’s stance could signal a potential shift in sentiment amongst other dovish members on the MPC, particularly if labour market data continues to improve.

The ONS said on May 27 that about 8.0% of the workforce was still furloughed, which is the lowest figure of 2021 so far.

Should this rate continue to fall ahead of September then the BoE might grow more confident on the economy’s prospects.

Short-term economic data continues to suggest the UK economy is experiencing a rapid rebound, but for those watching the Pound there are concerns that the data might not be quite strong enough to prompt more meaningful gains.

The ONS now offers a weekly report of short-term indicators from various sources that aims to shine a light on how the economy is progressing, with data showing the numbers dining out have risen sharply while online job advertisements are back at pre-pandemic levels.

But, overall spending data in this week’s set of figures from the ONS and BoE have disappointed a couple of analysts we follow, with one saying we would need to see stronger outturn if the Pound is to catch a more meaningful bid.

“My impression remains that we’re seeing a consumer recovery, but no boom. The media narrative has lurched too far towards the latter,” says Samuel Tombs, Chief UK Economist at Pantheon Macroeconomics.

In the week to 20 May 2021, the aggregate CHAPS-based indicator of credit and debit card purchases was at 96% of its February 2020 average level; this is an increase of 31 percentage points from the level seen in early January 2020

“Expectations were that social spending would recover to above pre-pandemic levels in a similar vein as the May 17th reopening saw indoor dining and hospitality reopen. However, this wasn’t visible in last week’s spending data as social spending underwhelmed at just 83.5% of February 2020’s average,” says Simon Harvey, Senior FX Market Analyst at Monex Europe.

Harvey says the Bank of England’s aggregate credit and debit card spending data (CHAPS) is arguably the best real-time indicator of how the consumer is reacting to the easing of lockdown conditions. 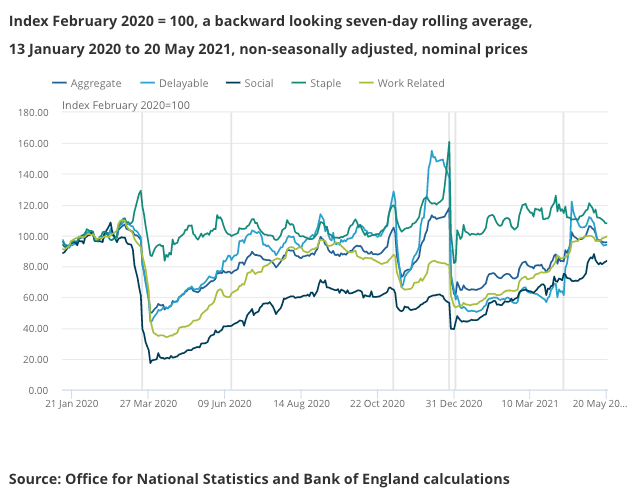 “The recovery in consumers’ spending has hit a ceiling for now,” says Tombs.

The British Pound has risen in value over the course of 2021 amidst a combination of fading Brexit risks as well as expectations for the UK economy to enjoy a bigger economic rebound than that expected in the U.S. and Eurozone.

But, should the scale of the domestic rebound disappoint, Sterling could come under pressure as markets readjust expectations.

“Expect sterling to remain in somewhat of a holding pattern until we stay to see a definitive trend in how the consumer reacts, both in real-time and hard data,” says Simon Harvey, Senior FX Market Analyst at Monex Europe.

The Pound-to-Euro exchange rate raced to 1.18 in the first three months of 2021 but has since fallen back and is trending in a broad sideways pattern with the Euro finding support on the Eurozone’s own rebound story.

For further gains in GBP/EUR the UK economy would have to start delivering upside economic data surprises while the Eurozone would need to disappoint.

The Pound-to-Dollar exchange rate (GBP/USD) meanwhile looks unconvincing in attempts to break above 1.42, but it must be emphasised that it appears that for the time being the Dollar element of this equation is in charge and renewed USD weakness is likely to be the catalyst to new highs.

Central to the UK economic recovery story will be how consumers react to the lifting of restrictions with economists saying the huge sums of money saved during the pandemic would likely be spent.

Just how much of that is spent and over what timeframe will be key to how the coming months play out for the economy, interest rate expectations and the British Pound.

“For sterling, a definitive trend that outlines how robust the economic recovery is set to be in the coming months is yet to be visible in the real-time data,” says Harvey.

Explaining why there will be a sense of disappointment to the latest CHAPS figures, Harvey says following the April 12th easing delayable spending rose substantially above pre-pandemic levels as non-essential stores were reopened and pent-up demand was released.

Delayable items such as clothing and household goods remains above pre-pandemic levels, albeit at a lower level than the aftermath of the first stage of reopening.

“Expectations were that social spending would recover to above pre-pandemic levels in a similar vein as the May 17th reopening saw indoor dining and hospitality reopen. However, this wasn’t visible in last week’s spending data as social spending underwhelmed at just 83.5% of February 2020’s average,” says Harvey.

Monex Europe note aggregate spending has struggled to break above pre-pandemic levels since May 11th, despite the latest easing that took place.

Data from Springboard meanwhile showed footfall at retail locations was 71% of its level at the same point in 2019, Tombs notes it has been edging down since the week shops reopened, confounding hopes of a further pick-up after the service sector reopening on May 17.

The British Pound failed to react to the data in a discernible matter, suggesting for now the market is willing to exercise patience and await further data.

But Martin Beck, Lead UK Economist at Oxford Economics says some of the disappointment in the data could actually be down to the unseasonably cold weather of late.

“A recent bout of unusually cold and wet weather may lie behind signs in the latest high-frequency data that the pace of the consumer recovery is softening. But we think there’s a good chance June will see the rebound pick up again,” says Beck.

Any negatives perceived int he CHAPS figures will to a degree be countered by another ONS release of near-term data that showed the seven-day average estimate of UK seated diners was at 132% of the level in the same week of 2019. 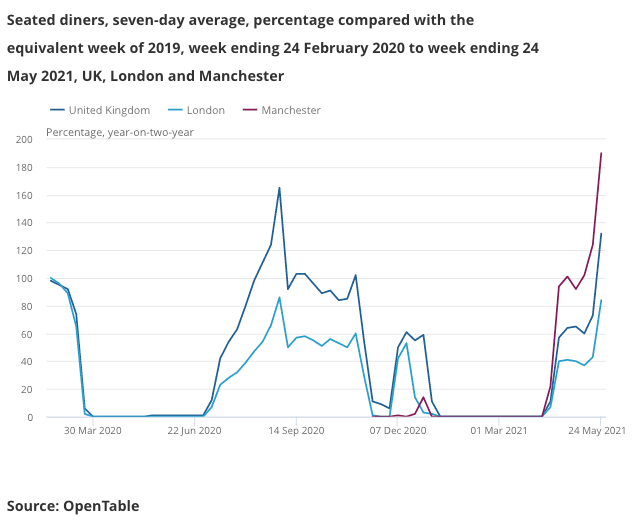 The ONS says this is an increase of 59 percentage points from the previous week​ and follows the reopening of indoor dining across much of the UK on 17 May 2021.

Consumer spending on experiences therefore looks to be robust and this could underpin service sector activity at this point in the recovery.

Elsewhere, in a supportive development for the labour market, the ONS says the volume of UK online job adverts on 21 May 2021 was at 118% of its February 2020 average level.

The ONS utilises data from Adzuna and finds an increase of 4 percentage points from the previous week, noting it to be higher than the volume of online job adverts on the equivalent day in 2019. 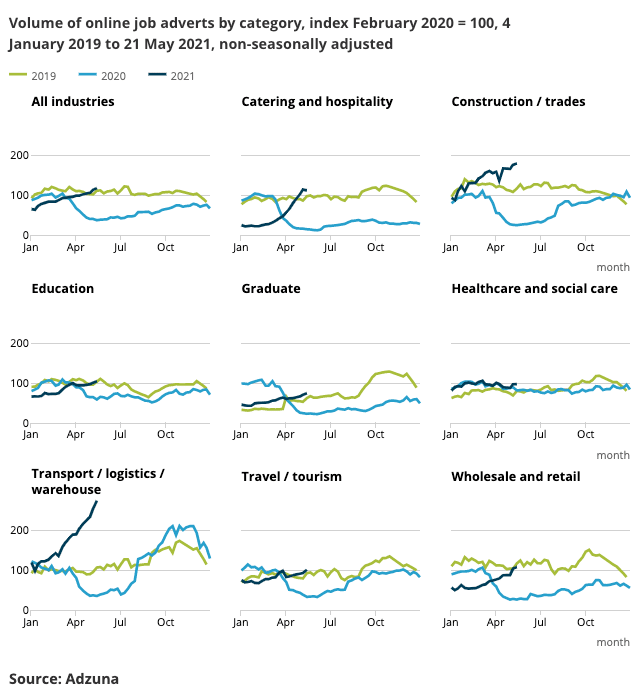