Why USD/CAD “Rallies Should Be Short-lived”

USD/CAD’s broader downtrend should extend over the remainder of the week says Micaella Feldstein, an analyst at Natixis.

The pair has been in a descending channel since the June highs and it should continue lower over the short-to-medium term. Eventually, she even forecasts the pair breaking below the lower border of the channel. 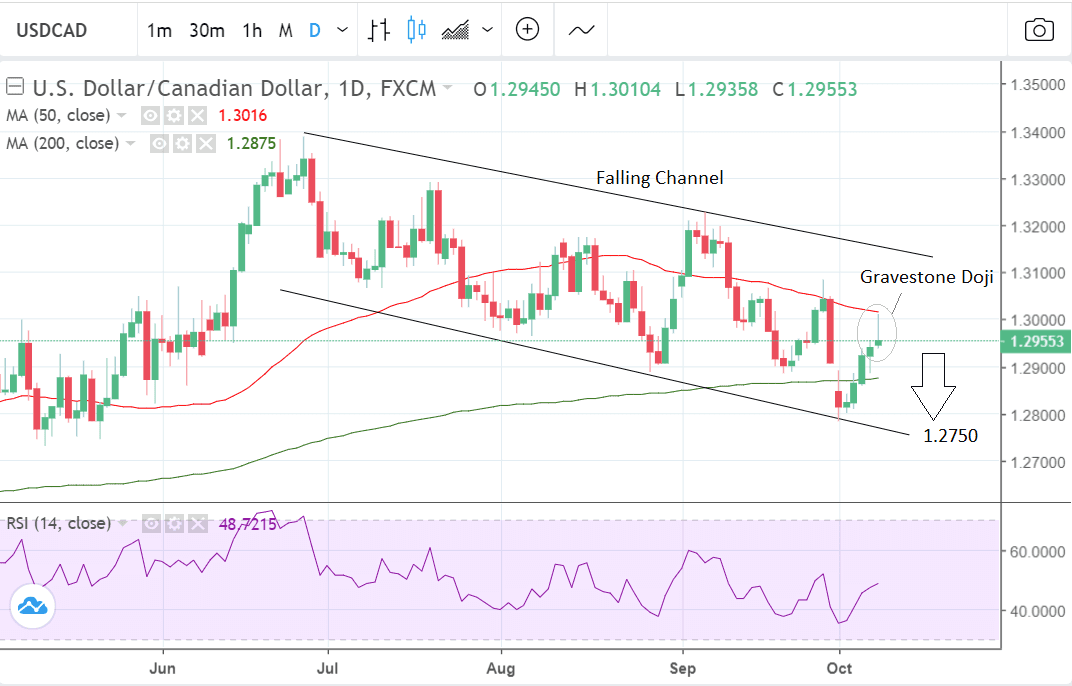 “Rallies should be shortlived and the USDCAD should break frankly below 1.28 -1.2820 (lower band of the bearish channel in place since June 18),” says Feldstein.

We also note the pair has formed a bearish ‘gravestone doji’ Japanese candlestick reversal pattern on the daily chart after briefly rising to touch the 50-day moving average (MA) on Monday. If the gravestone doji is followed by another bearish candlestick on Tuesday it should provide confirmation of a reversal lower.

The decline is likely to extend to an initial downside target at 1.2750, which is the 50% Fibonacci level – or midpoint – of the previous 2017-18 rally. The midpoint of previous moves is a level markets often gravitate to. Sometimes they stall at these levels, or rotate and change trend. This can make the midpoint a risk to the existing trend.

The next target after that is the 1.2700 level at the rising trendline (see below).
Trendlines also often provide support to prices and sometimes downtrending prices will stall when they reach them or even rotate higher and change trend. 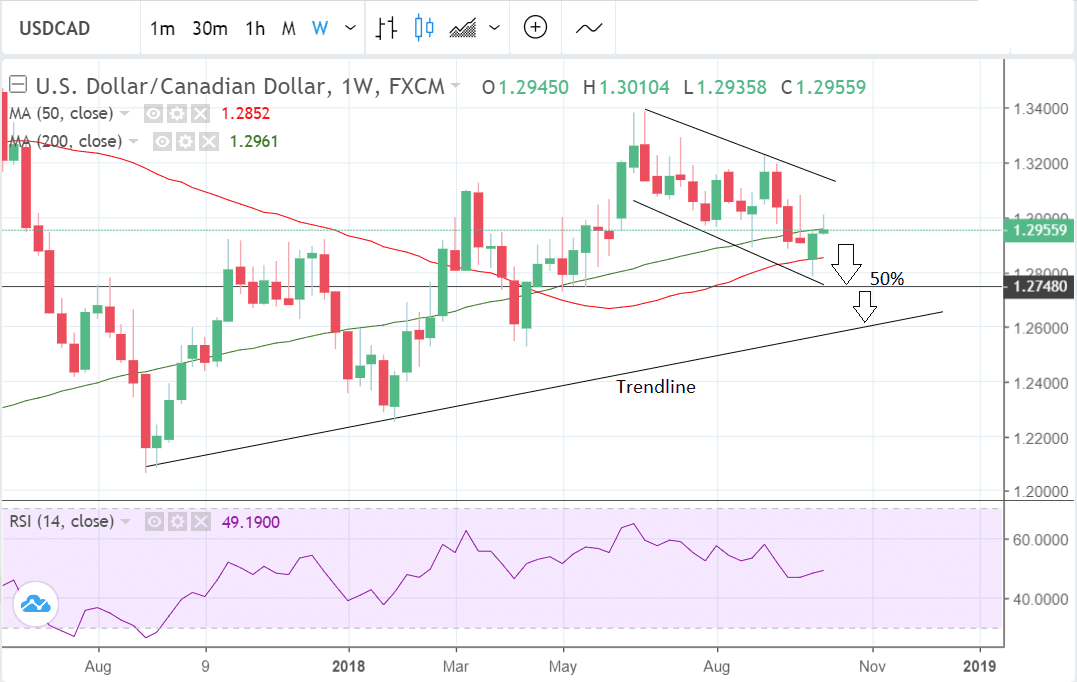 A break below the trendline would “underpin bearish momentum,” says Feldstein, and be something of a game-changer for the pair.

We note substantial support and resistance on the chart from various moving averages which could hinder the potential decline forecast by Natixis.

The 50-week MA is currently holding up the exchange rate at the current level on the weekly chart and would be a tough obstacle to crack through.

A break below last weeks lows at 1.2782 would be necessary for confirmation the 50-week MA had been broken and the way lower was more open.

The USD/CAD pair rose at the end of last week after Canadian payrolls data showed a rise of 80k part-time jobs but fall of 17k full-time jobs in September. This was seen as a negative development for the economy as it can indicate employers are unable to afford to offer workers full-time contracts.

US data was also mixed, but analysts explained that as a temporary aberration resulting mostly from the ill-effects of Hurricane Florence. Despite lower-than-expected payrolls, the US data showed unemployment falling to a new historic low of 3.7% in September. It is the first time unemployment has been so low in the US since 1969.

AdvertisementGet up to 5% more foreign exchange for international payments by using a specialist provider to get closer to the real market rate and avoid the gaping spreads charged by your bank when providing currency. Learn more here

Inflation may not be as transitory as earlier thought