The Weekly Bottom Line: Eyeing Inflation Like a Hawk

Equity markets experienced further losses this week, following more hawkish language from Fed officials that signaled rate hikes could kickoff as early as March. The S&P500 has fallen just over 3% from the beginning of the year. Treasury yields continue to march higher as markets adjust their expectation for monetary policy.

Looking at the recent inflation data, the case for rate hikes is clear. Headline CPI ended the year up 7% year-on-year (y/y), the fastest pace since 1982. In December, the month-on-month pace of inflation cooled slightly to 0.5%, as energy prices were a drag on the headline for the first time since April. But, core inflation was even hotter, up 0.6% m/m, driven by strong increases in shelter inflation and another jump up in used vehicle prices. While those items were the biggest contributors, prices were up strongly for a host of goods and services, continuing a trend of broadening price pressures that has been evident since October – the same month that Fed Chair Powell changed his tune on whether the run up in inflation is transitory.

Accelerating goods prices take much of the blame for inflation’s 40-year record high (Chart 1). You have to go back to 1980 to see goods prices rising 12% in one year. Goods prices should cool over the coming year as production, inhibited by the pandemic and global input shortages, begins to normalize. But, just as it does, service price growth looks to accelerate. Services prices were up 4% year-on-year in 2021, an acceleration from a 3% pace immediately prior to the pandemic, but not out of line with past periods of economic strength. This is likely to move even higher in 2022, keeping pressure on the Fed to tighten policy. 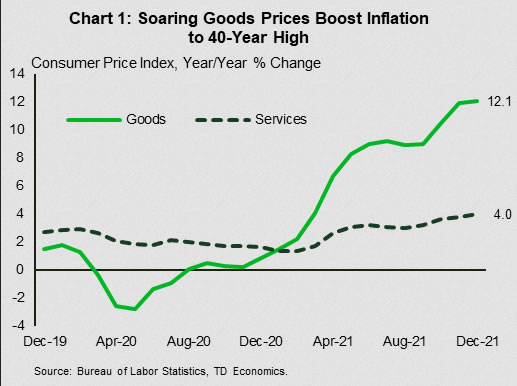 The impact of elevated inflation is already evident in retail sales. Retail sales surged in the spring as a third round of stimulus payments from Washington hit Americans’ bank accounts. Nominal sales have plateaued, in part as consumption shifts away from goods, which dominate retail sales, and towards services. However, when you compare to sales adjusted for overall inflation, you see how price growth has increasingly eroded consumer purchasing power (Chart 2). Given that goods prices are up more than services, the picture is even more dire. 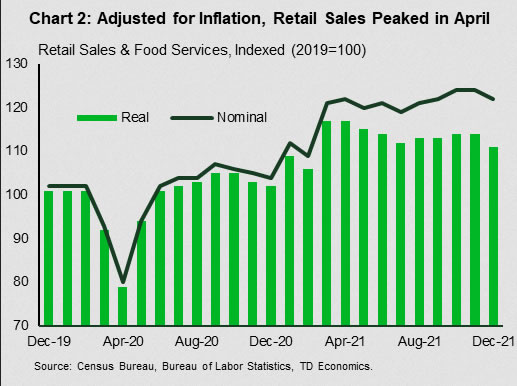 Any way you slice it, December’s retail sales data showed that consumer spending lost momentum towards the end of the year. Our December forecast projected real personal consumption expenditure growth around 6% in the fourth quarter. The data released since suggests that it is going to be closer to 4%. It also provides a soft starting point for the first quarter, where spending is likely to slow to 2% as consumer caution on Omicron weighs on close-contact services.

Inflation is also cutting into wage growth, something that has not gone unnoticed by Fed officials. At his Senate confirmation hearing, Fed Chair Jay Powell delivered his most hawkish messaging on inflation yet. Fed Governor Lael Brainard, who is the nominee for Vice Chair of the FOMC to succeed Richard Clarida, echoed his remarks, mentioning that workers are worried about how far their paychecks would stretch. Other Fed officials who spoke this week similarly signaled that interest rates are forthcoming, likely beginning as early as March.

Canada – All Eyes on Inflation

The economic calendar was unusually empty this week, but the next week will be anything but quiet, with a number key data releases on the docket. With this week’s news of inflation south of the border hitting a 7% mark, all eyes will be on inflation numbers in Canada next Wednesday. Fanned by the similar flames of rising goods prices amid supply-chain bottlenecks and strong consumer demand, inflation has been running hot in Canada as well, though reassuringly more than two points below its U.S. counterpart (Chart 1). 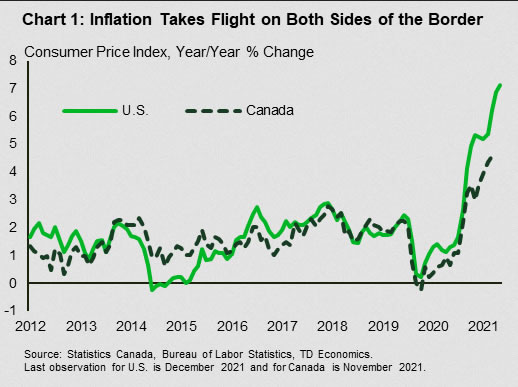 While those surveys won’t capture Omicron’s full impact, they will likely still show an increase in the businesses’ near-term inflation expectations and pricing plans. In December’s CFIB survey, small businesses’ intentions to raise prices over the next 12 months reached a survey’s high at 4.6%. At the same time, small businesses’ concerns about shortage of inputs and distributional challenges continued to mount, weighing on their ability to ramp up production. Labour shortages, already acute before the Omicron hit, will be made worse in the near-term as workers become sick or are required to isolate. All in all, while Omicron’s impact is expected to be relatively short-lived, supply-chain issues may take a turn for the worse in the near-term, restraining growth and pushing prices higher.

This week’s Bank of Canada research showed that first-time buyers are increasingly unable to get their foot in the housing market’s door, facing high prices and intense competition from investors and repeat buyers. The share of home purchases by the first-time buyers fell by 3 percentage points since the start of the pandemic, reaching a new low in the mid-2021 at 46.8%, down from 49.8% at the start of the pandemic (Chart 2). Low variable rates on mortgages are boosting demand for real estate. More than 50% of new mortgages borrowers in recent months opted out for a variable rate mortgage. This could be another reason for the Bank of Canada to expedite rate liftoff. 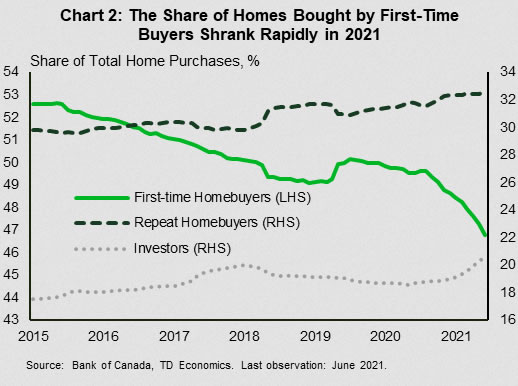 7 of the Best Robinhood Stocks to Buy in January: ABNB, GME, MRNA