Where Will GBP/USD Exchange Rates be in 2018? GBP to USD

The past 12 months have been momentous for both the UK and the US and, naturally, two events in particular – the vote to leave the EU and the election of President Trump – have driven volatility in GBP to USD exchange rate. Indeed, on some short-term measures the level of volatility in GBP to USD was higher than the dark depths of the Credit Crunch almost ten years ago.

Since the election of Donald Trump, sterling has spent the majority of its time hovering around the 1.26 level – in fact, it has averaged 1.2664 since the beginning of 2017. The time spent below that average was mainly at the beginning of the year when markets still believed that the Trump White House’s reform agenda would progress easily. Since then, however, investors at the margin have viewed the news coming from the United States as more negative than that from the UK.

That is not to say that the news from the UK is overtly positive but currency markets are all about relative value.

Politics: Not positive for either

One year from now more than 50% of the time the UK has to negotiate its exit from the European Union will have passed, unless a transitional arrangement is signed sooner. At the time of writing, negotiations have stalled as initial discussions over the so-called ‘divorce bill’ and the nature of the border between the UK and Ireland have dominated. The longer these issues distract from arguably more vital discussions on trade and investment, the more pernicious the atmosphere around sterling will become.

Similarly the Trump administration is at a pretty low ebb. Its healthcare reform plan in tatters and subsequent legislation and votes on tax reform and regulations have been held up. The Special Prosecutor investigations into the Trump campaign’s relationship with the Russian state could throw up any number of possibilities. How negative for the USD this is in the longer term we will have to wait and see but the Trump Presidency has demonstrated Teflon like qualities so far.

The latest Quarterly Inflation Report showed that the Bank of England struck is altogether rather downbeat; growth forecasts have been cut and inflation projections still look relatively benign. This directly feeds into the belief that as we move further past the anniversary of the UK’s decision to leave the EU, this base effect on UK price levels will diminish and year on year inflation will calm.

The pain that UK consumers are facing at the moment is not just as a result of a pickup in prices but a slowing of wage growth too. While the Bank of England may be confident that inflation may become more benign there is less confidence that pay will start to charge higher.

We foresee that while the Bank of England may continue to make noises about rate hikes, an actual increase in borrowing costs is not likely in the coming 12 months and therefore limited support will be afforded to the pound by the central bank.

In the US the Fed has made it fairly clear that they would like to begin the reduction of their balance sheet as soon as September. This is not too much of a surprise and it perhaps validates the recent fears over just how many interest rate rises the Fed can push through in the coming months. Back in May there was a 50% chance that interest rates would rise in September; that is now 4%. There is a 40% chance of something happening in December but that has slipped from 60% over the same time period.

The chart below shows the high, low, median and mean estimates of where a panel of 92 economists and strategists surveyed by Bloomberg believe GBPUSD will trade between now and the end of next year. 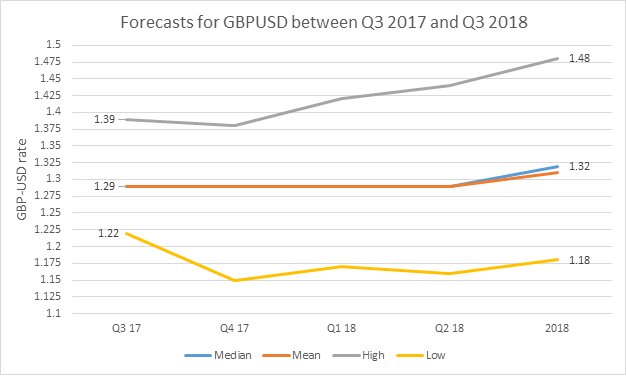 Complex political backdrops mean that neither sterling nor the US dollar is in the rudest health and the negatives of each pair are basically cancelling each other out. Our view is more negative on the pound given the generational and exceptional changes being negotiated around the UK’s relationship with the EU, while we believe the USD may benefit from weakness against the EUR in the coming months.

The Fed Is Raising Interest Rates: These Growth Stocks Can Still Double in 2022